When "Drama" Comes to your Group 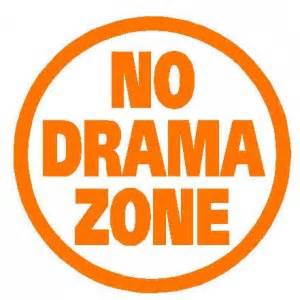 What do you do when members of your group get involved in "drama"?

No I am not talking about the church drama that comes up for Christmas or Easter.  I am talking about times when people sitting across the room have issues with one another.  How do you as a leader deal with this?

Let me give you some scenarios where this could be involved: a recently divorced couple, conflicting political views, a business deal between group members gone awry, a couple breaks up, or whatever issues that may come.  The reality is that these just scratch the surface of the drama that we sometimes face as leaders among group members in our church.

Did the Lord know there was going to be times of drama in the church?  Uhh yeah.  We are human.  We are fallen.  We have times that we mess up completely, even as leaders.  Yet through it all there is a path that the Lord calls on us to take to keep our lives, and even our groups, drama free.

The reality is that there are going to be times when you will have to confront someone about drama. The question then becomes, what does this look like in our group?

Here are a few quick things to help keep your group a "drama" free zone:

1. Remember the goal is reconciliation

Look at what Jesus said about keeping things drama free.

Listen to Matthew 18:15-17a, "If your brothers sins against you, go and rebuke him in private.  If he listens to you, you have won your brother.  But if he won't listen, take one or two more with you, so that by the testimony of two or three witnesses every fact may be established.  If he pays no attention to them, tell the church."

What was he talking about?  The process of reconciliation when a brother or sister has fallen.  This process should also though be a part of how we deal with those that bring drama into a group.  Believe it that the devil desires to take some small thing and blow it up.  But when reconciliation is involved, it quiets down many things.  We have to keep this at the forefront of our discussions that we encounter with one another.

This means as well trying to keep the matter as confidential as possible.  Once you learn about an issue between members and you start to see that it is fleshing out in the group, then this can be a time to deal with it individually.

I understand that this is very difficult when you know that one person may seem to be in the wrong and the other is not.  Still though, you can have just as much of an impact on keeping each person engaged and available to be ministered to simply by not playing sides, but once again keeping reconciliation as the goal.  This is where it is good to have a discerning heart.  Sometimes just listening to someone makes as much of an impact as trying to speak to them.  There will be a time to speak and give words of encouragement, rebuke, or correction.  This still means that you don't have to take a side, but just be a voice of truth in each sides spiritual journey.

This is for both sides involved.  If an issue arose among group members and you could start to see how it was affecting the group, then it would be wise to give clear expectations of the purpose of the group and the expectations of the group.  What does that mean?  It may mean having a discussion with both sides to make sure that they do not try to win support one way or another.  It may mean that you discuss about how the group is there to do the teaching of God's Word, reaching out to new people, ministering to one another, and having community in fellowship.  This will give you the opportunity of if the issue ever arises in the group in the form of discussion where one person tries to take a verbal jab at another, then you have the ability to publicly correct the person or side.  I have found that when you are clear about the purpose of the group and keep everyone focused on Christ, this removes a lot of drama.  It also removes anyone thinking that the group is the platform by which they can share this with others.  I am not saying that we shouldn't have prayer for one another and minister to one another, but when it involves shaming or segregating the group for personal gain, that is not biblical, that is a tactic of the enemy.

4. Have a ministry plan.

When I try to speak with someone about a matter of rebuke or correction, I always seek to have a plan of reconciliation.  What does this mean in the context of our discussion about drama?  It means that there may come a time when you have to ask those involved to not attend the group.  If you are going to do this though, be sure that you have a place prepared for each person to be ministered to.  It may mean if it is a couple going through a divorce yet both people are involved in the church, then you have a plan for one of the members or both of the members to move to another group temporarily.  This allows the people involved to not feel either victimized or condemned for attending or not attending their group.  It also removes the ownership of the group, as I have heard people say before, "that is my group and you need to stop coming."  If we remove both parties temporarily then it will help in the process.  Does this mean that we stop ministering to them?  By no means!  It does mean though that we are encouraging reconciliation and unity at the same time, while it does not affect the group.

There may be some other ways that you have found to dealing with "drama" in your group.  Please comment and share below.

Popular posts from this blog

June 24, 2019
I Corinthians 4:16-17  Therefore I exhort you, be imitators of me. For this reason, I have sent to you Timothy, who is my beloved and faithful child in the Lord, and he will remind you of my ways which are in Christ, just as I teach everywhere in every church. From Paul's words, we can see the encouragement (imperative) is to be an imitator. For this week at Super Summer in the discipleship sessions, we discussed what it means to be an imitator of Jesus Christ.  To be imitators of Jesus Christ is to be rooted in Christ as we recognize the authority and lordship of Jesus in our lives! What He says (His Word), we are to do! Simple enough right? Yet this is the very thing that we struggle with, just as in a game of Simon Says, we can miss it if we aren't listening. So the focus this week is to stop in the busyness of our lives and spend time listening to God and then to see how this carries forward to everyday. The example that we use is the Discipleship triangle called Up-I
Post a Comment
Read more

The Stages of a Group: How to build group cohesion

January 14, 2020
The Stages of a Group: How to build group cohesion How many of us when we start to meet with a group of people, we experience either a great connection or a flop? Often, we begin to look at ourselves and wonder what if this was really what we were supposed to do. Don’t worry, don’t get stressed. What we have found is that groups experience a natural outworking of how much they desire to stick together. The term is called group cohesion, which is basically how sticky they are. Larry Osborne has a book called “Sticky Church” and the process that Osborne promotes the most as to how sticky a church will be is through their small groups. Osborne says, “Anytime a group of friends commit to gather together to share their lives, pray, and discuss the biblical text and life application…good stuff happens.” The gathering together is how a group becomes cohesive with one another. What is interesting though is that this just doesn’t automatically happen. There are times
Post a Comment
Read more

December 19, 2019
Hey everyone, Just wanted to share some details about my recent book release. Hope that you enjoy! New Book Release from C Joseph Brasher titled The Protectors: Power On, see how a preteen boy navigates AI technology and learns where true protection comes from #protectors #power #christianfiction via ripl.com The Protectors: Power On Paperback- $9.99: https://www.amazon.com/dp/1676304185/ref=cm_sw_r_cp_api_i_CxG-Db35GCJ5B Kindle- $4.99: https://www.amazon.com/dp/B082VHH584/ref=cm_sw_r_cp_api_i_hHG-Db2SVGESM Follow my author page on Amazon for more information! https://www.amazon.com/-/e/B082XCDRL7
Post a Comment
Read more

Dr. Joseph Brasher
Married to Brittany (Since 2007) with daughters, Ellie Grace (born 2010) and Abby (born 2012). I am an Adult Ministry Pastor, PhD in Ed and Org Leadership, Love reading, sports, and the outdoors (Go anything TN).